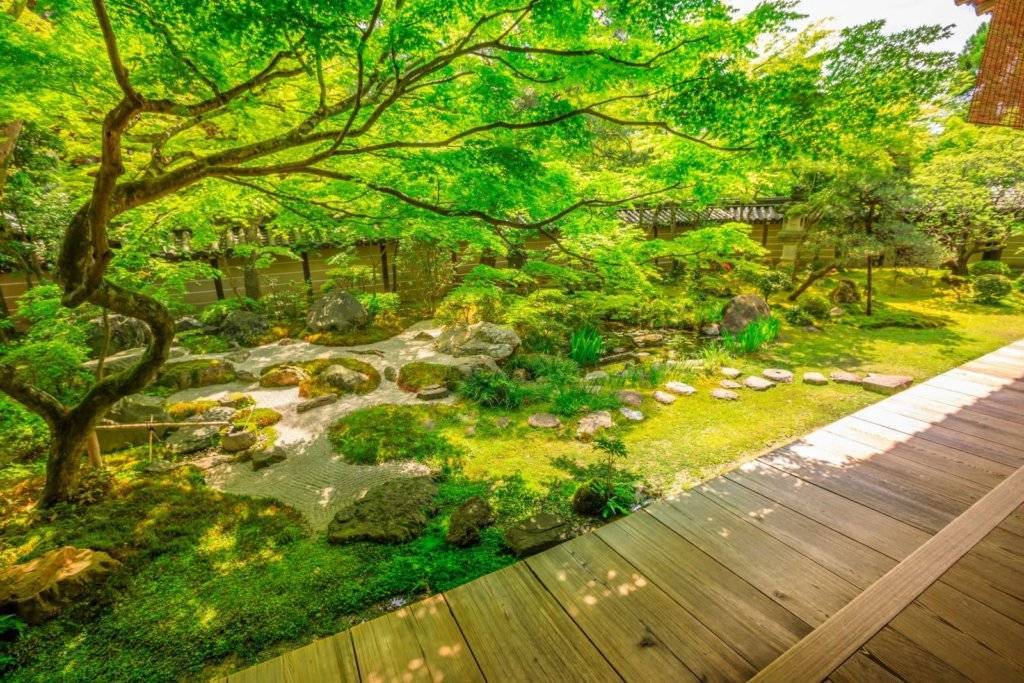 Japanese Gardens are becoming more and more popular with gardeners and Casanovas, both professional and hobbyist alike. There are three elements that are essential in a Japanese garden, those being water, plants and stone, arranged in a harmonious way.

If you have a small terrace, a patio, or even an old tea garden, or any space of fifty square feet you have the space to put a Japanese garden into play in your own garden spaces.

A pleasure to look at year round, it needs only really a bit of pruning and some weeding, and by combining native plants in your area, you can adapt this soothing garden style to your own climate and environment.

Hill and pond, generally made only for viewing, they have, as the name suggests, a pond, even if it is nothing more than a 12 inch square pond, , and plants and shrubs will suggest the hills and valleys.

Strolling Gardens, are based on the idea of a lengthy journey, where the path itself is the garden, and the placement of stones on the path will suggest where to stop and where to walk.

Teahouse Gardens: taking up a little more space, they are designed around a path leading to a small teahouse or pergola

Dry Landscape: are the classic Zen gardens of stone and rock and gravel.

Courtyard Gardens, are, as the name suggests, enclosed in a rock fencing or wooden fence, and the basin of water is included for cleansing away the dirt of outdoors before entering the gardens proper and then the home. The Japanese term for this is Shu-i-wa, meaning a point of energy.

If you like this idea, but are not willing to commit your entire garden or yard to the idea, a Japanese garden can be made in a small corner of your garden or yard, defined perhaps by a bamboo fence or a living hedge they are truly perfect for small modern gardens they are truly perfect for small modern gardens. A Japanese garden is the perfect way to take advantage of a rugged or hard to landscape area of your property because it makes use of so many native plants.

Donâ€™t overdo the plants and elements. Shibusa is the word the the Japanese use to describe a proper garden. It has many connotations but primarily what it is used to mean is restraint, or good taste and elegant simplicity. Use restraint in the design of your Japanese gardens.

When choosing plants, stones and watery features for your garden, look for big contrasts, such as lighter shades against darker and bold textures against fine ones. In a Japanese garden, the emphasis is on foliage rather than flowers, however a few flowers can be sprinkled among the foliage to emphasize the seasonal changes in your area.

A Japanese garden is a real delight to look at in any season or weather, so make sure to take full advantage of evergreens. In Japan many plants are grown simply because they look lovely with snow on their branches in wintertime.

Water is mandat0ry in a Japanese garden. whether or not it is running is really optional but even a small pool which houses one or two water plants, such as a pot sunken into the ground, or an outdoor small fountain will suffice, but should be included to get the water element added to the mixture.

Use off white gravels rather than pure white to keep the glare down, and the stones for your garden should be relatively large.

Scour landscapers, or builders who are always willing to get rid of stones theyâ€™ve dug up in their construction efforts. You might like to find some river stones to pile up in a table like manner or pebbles or river gravel which are easy to maintain.

For a restful note, add some windchimes, tie them to trees that are not visible, but the tinkling noise will be heard.

Enhance your theme by choosing rattan or bamboo furniture that will blend in appropriately with your Japanese theme.

When selecting plants for a Japanese style garden, try to incorporate a few Japanese style elements as well. Evergreens, a hardy bamboo, which is very easily grown, and Japanese maples, as well as perhaps some Japanese holly, red barberry and Swiss mountain pine are those which might be appropriate for what you are attempting to do.

Even a small still pool can have a single goldfish or a pair of them that are taken inside in the wintertime. Stocking your small pail with fish is a truly authentic touch. They add not only color, but also an element of peace. The added bonus is that they are voracious insect eaters.

Japanese gardens date back to the Heian period when Zen Buddhism was introduced from China. This new religion emphasized meditation and contemplation. As a result, people began spending more time outside enjoying nature. Gardens were created to help cultivate these thoughts and feelings.

The first true Japanese garden was built during the Kamakura Period. During this time, samurai warriors became interested in gardening and started building elaborate gardens around their homes.

The popularity of Japanese gardens in japan increased from the 14th century and up to the 18th century, It wasn’t until  after the Meiji restoration that foreign land architects became exposed to this Japanese style.

In order to create a beautiful Japanese garden, a cherry tree is a must ! Cherry blossoms bloom all over Japan between March and April each year. These flowers symbolize purity and beauty. A cherry blossom tree planted near a pond creates a perfect combination of both.

A traditional Japanese garden has many features including ponds, bridges, stone lanterns, moss covered rocks, and wooden walkways. Kenroku-en is located on Mount Takao in Kyoto. In 1716, Tokugawa Iemitsu ordered his gardener, Kobori Enshu, to build him a private retreat where he could escape the pressures of court life.

Kobori’s design incorporated everything he knew about landscape architecture at the time.

This famous temple Japanese garden dates back to 1633. Nanzen-ji is one of the oldest temples in Kyoto. Its name means “Temple of the South”. There are two main parts to this garden; the inner courtyard and the outer enclosure.

The inner courtyard contains three large ponds surrounded by rock walls. Water flows through channels carved into the stones. Small streams flow down the sides of the mountains surrounding the area.

There are four gates leading out of the inner courtyard. Each gate leads to another part of the garden. One of the most interesting aspects of this garden is its use of water. All of the paths lead directly to the edge of the ponds.

There are no straight lines in this garden. Instead there are curves and angles. When walking along any path, it feels like you’re moving through space rather than going across flat ground.

One way to make a Japanese garden look natural is to place moss rocks throughout the grounds. Moss grows naturally in moist areas such as rivers or lakes. Like other gardens, the plants in a Japanese garden absorb moisture from the air and grow roots which anchor them firmly in the soil.

When moss dies, it turns brown and looks dead. To keep your moss looking green, be sure to regularly remove old leaves and debris so that sunlight can reach the base of the plant.

Another important feature of a Japanese garden is the placement of stone lanterns. Stone lanterns were originally used for lighting purposes but have since become an integral part of Japanese culture. They are often placed next to pathways or around ponds.

Each lantern represents some sort of meaning. For example, when lit they represent good fortune. You’ll find these lanterns scattered throughout the grounds of Shinto shrines.

Before planting anything in your new Japanese garden, take note of the following tips:

Choose a location with full sun exposure. This will help ensure strong growth.

Make sure the site drains well. Puddles left behind after heavy rains may cause problems later if they fill up with stagnant water.

In Japan, people believe that stepping over certain objects while crossing a river brings bad luck. Therefore, before building a moon bridge, consider whether or not it would bring misfortune upon anyone who crosses it. If possible, avoid placing the bridge near bodies of water. If you do decide to build a moon bridge, follow these guidelines:

A waterfall is a great addition to any Japanese garden. It provides both beauty and sound effects. However, remember that waterfalls require constant maintenance. Make sure to check on the condition of the falls at least once every few days. Also, never allow children to play under falling water.

Zen gardens with buddhas are all good and well but if you want to create a beautiful Japanese garden then here’s a list of things you should know about creating one:

Choose a spot where you feel comfortable spending time outdoors. A quiet corner away from traffic noise is ideal.

Use native plants whenever possible. Native plants tend to thrive better in their own environment.

Avoid using grasses because they don’t hold up very well in wet conditions.

Consider adding a pond to your design.

Go ahead and check this video out for some inspiration.

The artisans responsible for making many traditional items found in Japanese gardens include potters, carvers, metalworkers, woodcarvers, weavers, jewellers, sculptors, painters, calligraphers, papermakers, and others. Here are just a few examples of the types of work done by each group:

Pottery – Pottery was first developed in China more than 2,000 years ago. In Japan, however, potteries began developing independently sometime between 500 BC and 300 AD. Today, there are still several different styles of pottery made in Japan. Some common forms include kamado ware, bonsai pots, sake cups, tea bowls, and other vessels.

Carpentry – Carpentry has been practiced in Japan for centuries. The earliest carpentry tools date back as far as 3200 BC. During this period, wooden structures such as temples and palaces were built.

By the 7th century AD, most buildings had begun being constructed out of brick instead of wood. Since then, carpentry techniques have changed little. Nowadays, Japanese builders use modern materials like steel beams and concrete foundations.

A traditional Japanese tea ceremony involves preparing the room where guests will sit before drinking tea.

In order to make sure everything looks just right, use a light colored carpet on the floor and perhaps throw in some colored fluorescent lights to brighten up the space.

Use a dark wood coffee table instead of a glass top table. Also, place a low stool next to the table so guests donâ€™t feel uncomfortable sitting on the floor.

To set the mood, play soft music in the background. Place candles at either end of the table. You may even choose to put out a bowl filled with water and a teapot.

To serve tea, prepare two cups of hot water. Add one teaspoon of loose green tea leaves into each cup. Pour boiling water slowly onto the tea leaves. Let it steep for about five minutes. Serve the tea using a ceramic pottery cup.